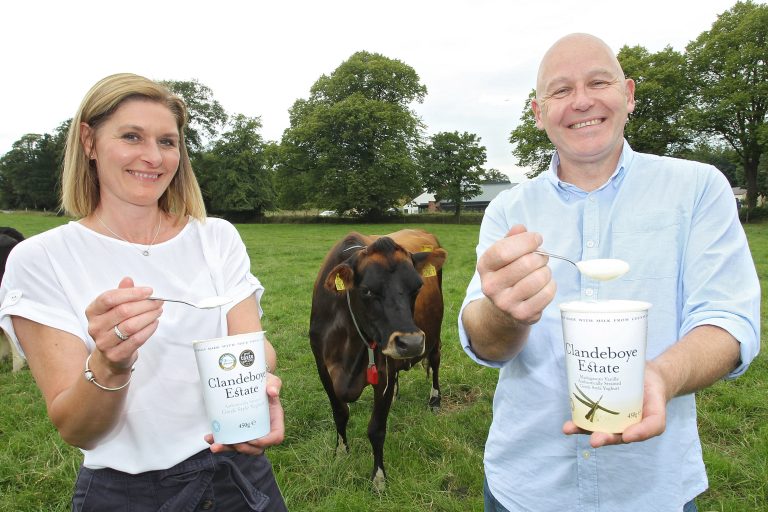 Clandeboye Estate Yoghurt has opened a £2 million creamery that will allow the company to quadruple production in order to grow sales with the potential to move into new markets.

The new site on the Clandeboye Estate sees the company moving from its original incubator site at Ards Business Hub after fifteen years of sustained growth.

General Manager Bryan Boggs explained that the company has grown between 30- 40% year on year since its inception in 2007 and needed a purpose-built factory in order to continue to develop and seek out new markets.

“When we first came to Ards Business Hub we had two staff and processed 300 litres of milk each week. Now we employ 20 people and process 6000 litres per day,” he said.  “It had always been our dream to build a sustainable business on the Clandeboye Estate, powered by green energy, using milk from our own herd,” Bryan added.

The business was the idea of the late Lady Dufferin who hired Bryan, an experienced food technician, to create an artisan yoghurt using milk from her herd of pedigree Holstein and Jersey cows.

After developing the process at Loughry College, Bryan took a unit at Ards Business Hub to start production and prove that there was a market for the locally made yogurt.  Bryan explained: “As a small start-up, we didn’t want to risk a long-term lease and the unit at Ards allowed us to trial the product. Plus, all the food production units are fully serviced so there was no additional investment in the site needed.”

Clandeboye Estate Yoghurt started in a single unit with its first sales from a stall at St George’s Market. As it began to supply the Hastings Hotel Group and then all the major supermarkets in Northern Ireland and the Republic of Ireland, it took an additional three units.

Now with the new creamery allowing for increased capacity, the company is looking into new markets, particularly in England, Scotland and Wales, which would require a massive increase in production.  “Our close-knit team has played a hugely important role in this move and this new purpose-built factory will allow us to grow further. We are right on the parkland at Clandeboye and can see the cows that produce our milk out the window, so it’s a real farm to spoon journey,” he said.

Nichola Lockhart, CEO of Ards Business Hub, said that she and her team were proud of the role they played in helping this thriving business through its journey from start up to becoming a major supplier of high-quality local yoghurt.  “Clandeboye Estate Yoghurt is one of Northern Ireland’s true food heroes. They had a clear vision to create an artisan product and built their business through quality, hard work and dedication. Ards Business Hub is a social enterprise and our aim is to help businesses grow and flourish and we are delighted with the success of this company,” she said.

Other food businesses located there include Arctic Cubes, A Slice of Heaven, Mike’s Fancy Cheese, Bara Bakehouse and Hill’s Mixtape.

We collect information, which may include personal data, from your browser when you use our site. We use a variety of methods, such as cookies and pixel tags to collect this information, which may include your IP-address; unique cookie identifier, cookie information and information on whether your device has software to access certain features; unique device identifier and device type; domain, browser type and language, operating system and system settings; country and time zone; previously visited websites; information about your interaction with our site such as click behaviour access times and referring URLs.

Third parties may also collect information via Sites through cookies, third party plug-ins and widgets. These third parties collect data directly from your web browser and the processing of this data is subject to their own privacy policies.

This website uses cookies to improve your experience while you navigate through the website. Out of these, the cookies that are categorized as necessary are stored on your browser as they are essential for the working of basic functionalities of the website. We also use third-party cookies that help us analyze and understand how you use this website. These cookies will be stored in your browser only with your consent. You also have the option to opt-out of these cookies. But opting out of some of these cookies may affect your browsing experience.
Necessary Always Enabled
Necessary cookies are absolutely essential for the website to function properly. This category only includes cookies that ensures basic functionalities and security features of the website. These cookies do not store any personal information.
Non-necessary
Any cookies that may not be particularly necessary for the website to function and is used specifically to collect user personal data via analytics, ads, other embedded contents are termed as non-necessary cookies. It is mandatory to procure user consent prior to running these cookies on your website.
SAVE & ACCEPT